IMPORTANT NOTICE
The TEXT on this Webpage regarding
EDIBLE WILD MUSHROOMS
is as important to your SAFETY as the photographs!
IF IN DOUBT, THROW THE MUSHROOM OUT!

Keep in mind that some of these pages include photographs of poisonous mushrooms which resemble edible wild mushroom species; again, reading the accompanying text and applying that information is absolutely vital to your safety!

Note that even with some of the best, safest, most popular edible wild mushroom species, it is possible for an individual human being to have an allergic reaction to a particular species. This happens with the grocery-store button mushroom (Agaricus bisporus), it happens with edible wild morel mushrooms, and it happens with strawberries.

It is also possible for illness to result from consuming mushrooms that are decaying, contaminated by pollution, or otherwise not in good condition. Before perusing the section of this Webpage that presents photographs of and text about edible wild mushrooms (and some of their toxic "look-alikes"!), you must read "The Mycophagist's Ten Commandments," which explains several hazards and provides advice on how to avoid those hazards.

Most importantly, be doubtful and be skeptical: Use the mushroom's description to seek evidence that the mushroom you've found is NOT the edible wild mushroom species whose photograph it resembles! 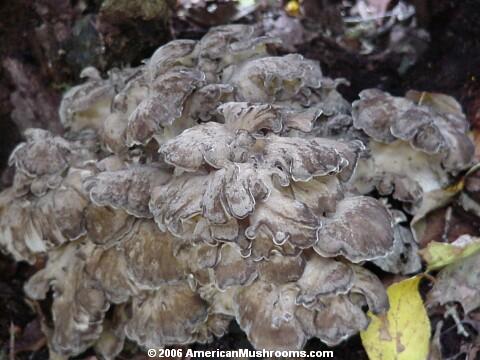 The Maitake mushroom (it has several "common" names including Hen of the Woods, Ram's Head and Sheep's Head, and here we shall use them interchangeably) is one of the best-known of all edible wild mushrooms, and it's also the one that offers the biggest harvests in many areas, for a single Maitake / Hen of the Woods specimen will often weigh as much as twenty pounds (exceptional specimens over 50 pounds are also found!). Maitake / Sheepshead is quite abundant in parts of the Eastern U.S. where there are abundant large oak trees. I've seen a single oak tree yield as much as 100 pounds of Maitake / Hen of the Woods in one season! 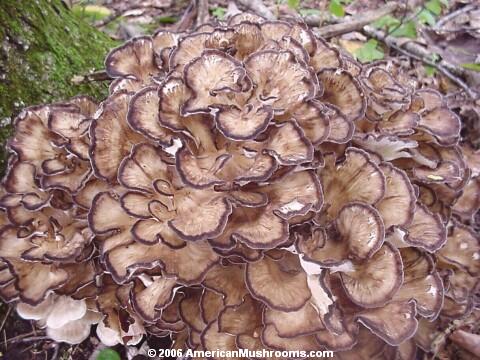 Grifolas, as many of the more knowledgeable amateur mycophiles call them because Maitake is the only species in genus Grifola, are polypore mushrooms, meaning the undersurface of each tiny "cap" has a layer of downward pointing tubes; the open ends of the tubes are visible as "pores." The color of a Maitake / Ram's-head mushroom's upper surfaces varies considerably in color, from pale tan to dark brown; most often, it is predominately gray, tan or brown. In my experience, Maitake / Hen of the Woods mushrooms tend to be most darkly pigmented when they grow in open spots where they are exposed to direct sunlight. Maitake / Sheepshead is never orange or reddish except that old specimens (which should not be eaten) may be colonized by colonies of mold, yeast or bacteria that produce yellow pigments. The undersides of the Maitake's / Hen of the Woods "caps" are white, and close examination (a hand lens or "magnifying glass" can help) reveals tiny white pores which are smallest near the edges of the caps. The Maitake / Sheepshead mushroom does not have gills!

Maitake / Hen of the Woods is basically a fall mushroom, but summer and (rarely) even spring fruitings have been reported.

Maitake / Ram's-head is typically associated with oak, so the best way to find it is to seek it during autumn around the base of large oak trees (living or dead) and stumps. Other known Maitake / Sheepshead hosts include elm, maple, beech, chestnut and sycamore; Maitake / Hen of the Woods has also been reported with larch (tamarack), pines and other conifers. Especially under big oak trees, Maitake / Sheepshead typically produces specimens annually for many years in succession.

I have had some good harvests of this mushroom directly on oak stumps, too, and on the butts of large windfallen trees. 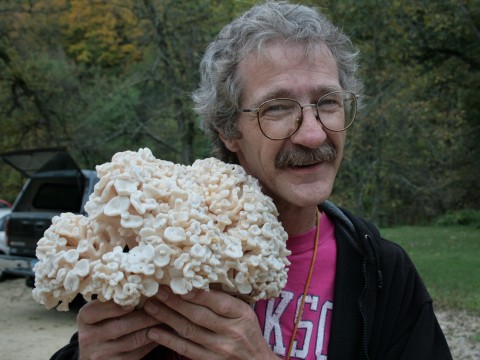 The Maitake / Sheepshead is an excellent candidate for fresh-freezing. I often use Maitake / Hen of the Woods to provide a taste of wild mushrooms to folks when I do a mushroom class or lecture… and even the most discriminating wild mushroom gourmets agree that the quality of fresh-frozen Maitake / Sheepshead is remarkably close to fresh. The trick is to cut the Maitake / Hen of the Woods mushroom into pieces of appropriate size for the cooking pan before freezing (blanching is not necessary) and, most importantly, when you're ready to use some, do not thaw them first: have the cooking pan heating before you even open the freezer door!

The name "Hen of the Woods" refers to its appearance, which strongly resembles a hen with ruffled feathers. In the Appalachian region, it is called "Sheepshead" or "Ramshead" by many—a similar visual metaphor. The Japanese name "Maitake" means "dancing mushroom"—not to imply that the mushroom itself dances, but that the mushroom hunter lucky enough to find Maitake is often inspired to dance happily at the discovery.

According to Paul Stamets of Fungi Perfecti, which offers supplies, spawn and materials for cultivating the Maitake / Sheepshead mushroom, it has awesome medicinal value on top of its wonderful flavor and meaty texture. 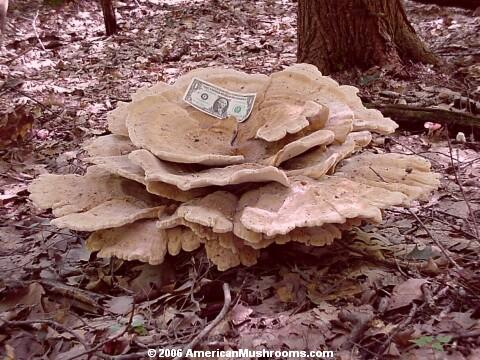 Berkeley's Polypore (Bondarzewia berkeleyi) is a safe "lookalike" species that is often mistaken for Maitake.

Maitake / Hen of the Woods is a very distinctive species with no dangerous "look-alikes" (assuming that one discounts gilled mushrooms that grow in clusters), making it a very good choice for the novice mushroomer. Berkeley's Polypore (Bondarzewia berkeleyi, see photo above) has much larger and thicker caps than Maitake / Sheepshead and is consistently tan to yellowish brown. The Black-staining Polypore (Meripilus sumstinei, see photo below)—which obviously develops conspicuous black stains (especially from handling after being picked)—has much wider and thicker "caps" than Maitake / Hen of the Woods but is grossly similar in appearance. Both of these similar-looking species are edible, but neither can hold a candle to the Maitake / Sheepshead in terms of flavor. 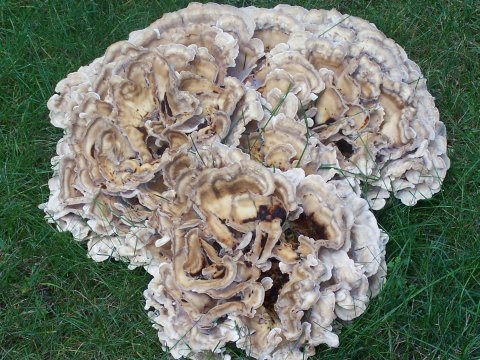 Old Maitake / Hen of the Woods specimens tend to be bitter, fibrous or both. As always, my advice is to collect only very fresh specimens for human consumption. Avoid Maitake / Ram's-head specimens from potentially contaminated habitats—see The Mycophagist's Ten Commandments for more information on this and other hazards! Also, Maitake / Sheepshead is notorious for growing around sticks, twigs, leaves, etc., so it is sometimes necessary to take a good deal of time to "dissect" a Maitake / Hen of the Woods specimen to make sure that no such forest debris ends up in the cooking pot.

More photos of the Maitake / Hen of the Woods mushroom can be seen here.

There's a lot more information about Maitake / Hen of the Woods
and other choice edible wild mushroom species in my best-selling book,
Edible Wild Mushrooms of North America.

Finally, here's a fine collection of Maitake / Sheepshead from under just one oak tree!
Photo by Dale Oakes (yes, that is his real name!) 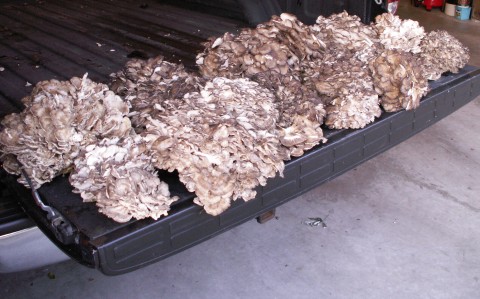