Of the thousands and thousands of wild mushroom species in North America, we know of at least 250 significantly poisonous mushrooms, and they are typically divided into eight different categories based on the chemistry of the toxins and the symptoms or syndromes that they elicit. 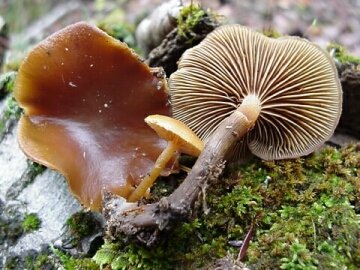 This is far and away the worst type of mushroom poisoning, causing more deaths that all other poisonous wild mushroom exposures combined, both in North America and globally. Poisonous mushrooms such as the Death Cap (Amanita phalloides), the Destroying Angel (A. virosa/A. bisporigera), and several "little brown mushrooms" ('LBMs,' we call them) such as the Deadly Galerina (Galerina autumnalis [see photo, right], G. marginatus, and G. venenata), Lepiota josserandii, L. helveola, and L. castanea have been shown to contain these dangerous toxins.

Symptoms are typically delayed anywhere from six to 24 hours after the poisonous mushrooms are consumed, which unfortunately gives the body time to completely absorb the toxins and can also make diagnosis more problematic because of the lack of uneaten specimens for proper identification. The initial symptoms mimic those of influenza or a stomach virus: nausea, vomiting, abdominal cramps, and diarrhea; these symptoms can be severe, e.g. violent vomiting, acute cramping, and bloody diarrhea.

The appearance of such symptoms six to 24 hours after eating the poisonous mushrooms should be cause for great concern, and every effort should be made to provide uneaten specimens (or, where practical, good photographs of the specimens) to a bona fide expert on the identification of toxic wild mushrooms!

After a period of apparent improvement that lasts approximately 24 hours—during which time misdiagnosed patients have often been, regrettably, released from medical supervision—the liver and kidneys begin to fail. Coma, permanent debilitating liver/kidney damage, and death are common outcomes. Medical treatment in properly diagnosed cases may include administration of massive doses of penicillin; kutkin; silibinin/silymarin (in recent cases, this treatment has show great promise); activated charcoal; and electrolytes. In some cases, a liver transplant is considered the only viable therapy for victims of these poisonous wild mushrooms. Regardless of treatment, many victims never fully recover from permament organ damage.

For more information on this type of mushroom poisoning, see the Death Cap mushroom. 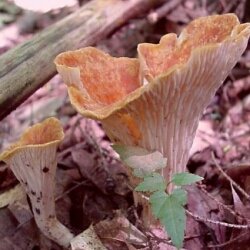 This is the most common type of mushroom poisoning but, generally, the least troublesome. Mushrooms in general contain a variety of proteins and amino acids, some of which are peculiar to certain species or certain genera of mushrooms and which cause mild to severe gastrointestinal irritation.

Symptoms usually appear within an hour and are rarely delayed more than four hours at most; they include nausea, vomiting, diarrhea, and abdominal cramps. These symptoms may range from mild to acute. 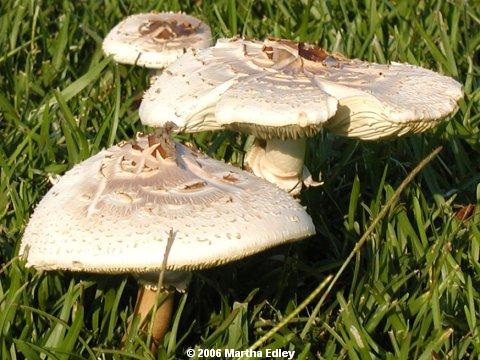 In most cases, the symptoms subside after the body has eliminated the meal and the troublesome amino acids, but in severe cases medical treatment and hospitalization are needed to maintain fluids and electrolyte balance. In rare cases, death can occur from heart failure secondary to dehydration and electrolyte depletion. If mushroom poisoning is suspected, seek medical attention immediately and, if possible, take uncooked specimens with you!

Some mushrooms cause this type of poisoning only if eaten raw or undercooked, or if eaten in large quantity, but in the case of others, it doesn't matter. Some individuals are particularly sensitive to these amino acids, while others are apparently immune to some mushrooms which cause significant sickness in most people who eat them. For example, a group of four friends tried the tempting Scaly-vase Chanterelle (Gomphus floccopus); an hour later, three of the four were fine, but the fourth was quite sick. In another case, a man camping with his family in Texas served the Green-spored Lepiota (see photo, right)—which he had misidentified as the edible Shaggy Parasol mushroom—to his entire family. Everyone got sick except him, even though he ate more than any other member of the family. 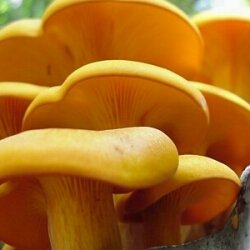 A handful of mushroom species contain this toxin, which can elicit visual disturbances, glandular hypersecretion (excessive secretion of tears, perspiration, and salivation), difficulty breathing, a drop in blood pressure, and an irregular heartbeat. In acute cases, fatalities have been reported due to respiratory failure. Nausea, vomiting and diarrhea are also typical. Symptoms appear within 30 minutes after the mushrooms are consumed and usually abate within 24 hours. Atropine is generally administered, based on the symptoms, regardless of whether muscarine poisoning is properly diagnosed. 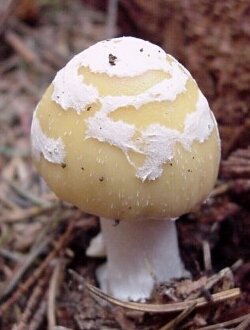 Several poisonous wild mushrooms of genus Amanita—most notably the Fly Agaric (A. muscaria) and the Panther (A. pantherina)*—contain muscimol and ibotenic acid, which, per Edible Wild Mushrooms of North America, cause "…delirium, apparent innebriation, manic behavior, and a tendency to perceive small objects as very large. Some victims exhibit a desire for intense physical activity; most experience a deep sleep, usually with visions. Nausea and vomiting may also occur. …" The North American Mycological Association (NAMA)'s Website states that "…the principle effects are on the central nervous system: confusion, visual distortion, a feeling of greater strength, delusions and convulsions. Drowsiness is a common symptoms, and many who ingest these mushrooms fall asleep and can not be roused (right away)."

* -- According to the North American Mycological Association (NAMA)'s Website, Amanita muscaria, A. pantherina, A. gemmata [see photo, right], A. cothurnata, A. frostiana, A. crenulata, A. strobiliformus, and Tricholoma muscarium also contain these chemical compounds.

Symptoms appear half an hour to two hours after ingestion of the toxic wild mushrooms and last for up to four hours or more. The only appropriate treatment is moral support—reassuring the victim that the effects of the poisonous mushrooms' toxins are only temporary. NAMA notes that atropine is not recommended, as it tends to exacerbate rather than relieve the symptoms.


Monomethylhydrazine (MMH) is a substance used as a propellant for rockets. It is produced when gyromitrin (present in some species of poisonous wild mushrooms) is gently heated. MMH interferes with normal utilization and function of vitamin B6, thus affecting amino acid metabolism.

Following ingestion of the poisonous mushrooms, seven to ten hours pass before the onset of nausea and vomiting. Victims typically feel bloated and experience abdominal pain and diarrhea. Deaths due to liver damage have been reported in severe cases. Several North American Gyromitra species, or false morels, are known to produce these symptoms. Some of the most common of these toxic mushrooms include Gyromitra esculenta, G. californica, G. caroliniana, G. fastigiata, G. gigas, and G. infula.

The NAMA Website adds that MMH is highly carcinogenic; that victims often complain of a headache as well; and that some mushrooms of other genera related to Gyromitra, i.e. Helvella, Verpa, and Cudonia, also contain gyromitrin. There is no specific antidote for this type of poisoning; medical treatment is largely supportive.

It is worth noting that many people in North America, oblivious of what we now know about their chemistry, continue to eat these mushrooms! Because MMH is so volatile, thorough cooking (especially a process of boiling, rinsing, boiling, and rinsing again) apparently drastically reduces the toxins—but there have been a number of cases where inhaling the fumes from the cooking pot has made the chef ill! I urge every mushroom hunter to avoid Gyromitra, Helvella, Verpa, and other closely related poisonous mushrooms. 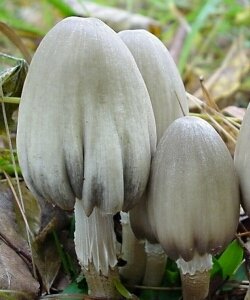 Several mushrooms are known to contain the amino acid coprine, which interacts negatively with alcohol in the human body. (Technically, it can be argued that these mushrooms are not poisonous in the strict sense—it's the alcohol which is toxic, and coprine "merely" exacerbates the worst symptoms of alcohol intoxication. Indeed, the NAMA Website no longer lists coprine as a mushroom toxin.)


Coprine poisoning occurs when mushrooms containing coprine… are consumed before, with, or after alcohol. … Following ingestion, there is a delay of thirty minutes to two hours before the onset of symptoms, including an increased pulse rate, flushing over the upper half of the body, headache, and rapid breathing. After fifteen to thirty minutes of these symptoms, the victim feels weak and dizzy and typically experiences nausea and vomiting.

It is important to note that coprine leaves the body primed for poisoning for several days (even a week by some reports) after eating the mushroom. Therefore, it is not only the consumption of a coprine-containing mushroom and an alcoholic drink at the same time that can cause coprine poisoning. Symptoms can also occur if someone drinks wine, for instance, two or more days after the meal or eats a coprine-containing mushroom after consuming alcohol.

I get quite a few E-mails from individuals whose primary or only significant interest in mushrooms is directly related to the recreational or "spiritual" use of psilocybin mushrooms. Rarely do I answer any of these queries, as I need to consider the legal and moral ramifications of assisting someone whose activity is both dangerous and illegal. My greatest concerns—aside from any legal issues—relate to the danger of "bad trips" (we're talking about very potent hallucinogenic toxins whose use is inherently dangerous) and to the danger of misidentification and consumption of even more dangerous fungi (in general, the psilocybin-seekers seem far less cautious than do folks seeking morels, chanterelles, or other edible mushrooms).

For some remarkable new information about medical potentials for Psilocybin mushrooms, click here.


Psilocybin and psilocin are alkaloids that interact with the brain, affecting nerve transmission and causing hallucinations. Following ingestion, fifteen to sixty minutes pass before the onset of anxiety, giddiness, hallucinations, perceived motion of stationary onjects, impaired time and distance perception, and marked euphoria. Later effects include uncontrolled laughter, color images stimulated by sounds, and tingling sensations of the skin. After several hours, victims typcailly fall asleep, experience intense colorful dreams, and then awaken with general muscle weakness and fatigue. Mushrooms reported to cause psilocybin-psilocin poisoning include Gymnopilus spectabilis, G. luteus, Panaeolus subbalteatus, Pluteus salicinus, and many species of Psilocybe. Possession of these species is illegal.


David Fischer will not assist individuals with growing, finding, identifying or ingesting psilocybin or other psychoactive mushrooms.